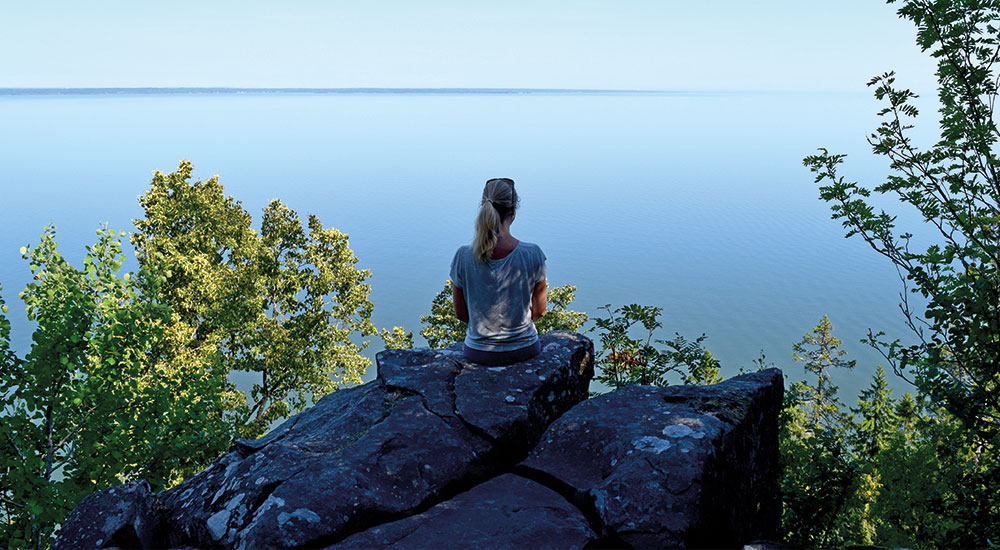 Dolerite is the name of the hard rock that we find on top of the table mountains.

On Halleberg and Hunneberg the doleritelayer is around 60 metres thick, and it protects the soft, underlying rocks of sandstone and alum shale. Doleriteis an igneous rock, which means that it was created from magma from beneath the Earth’s crust. Around 300 million years, magma forced its way up through cracks in the surrounding layers of rock and spread horizontally between layers of sedimentat shallower levels.

When the hot magma cooled and solidified, the doleritecracked in many places, sometimes forming hexagonal columns. This gave rise to the pillars, clefts, hollows and “caves” that can be seen along the sides of the mountains today.

On northern Halleberg, there is a crack in the dolerite that widened over time into a valley. This divides the most northerly part of Halleberg – Hallesnipen – from the southern part, and is known as Ovandalen. The nutrient-rich moraine soil has led to a very diverse herbaceous flora and broadleaf woodland. Hallesnipen is a nature reserve that is mostly covered by pine woodland. At the far end of Hallesnipen there is a fantastic view from one of the doleritestacks out over Lake Vanern.

NOTE! Please remember to walk carefully near the edge of the mountain. There is a signposted trail to both Ovandalen and Predikstolen.

Layers of history – In the geopark we find geological phenomena and places that are only found here or in a few places in the world, such as; the peneplane (the bedrock surface) with its flat surface, the table mountains that rise from the plain landscape and ice age deposits that create an incomparable landscape. This geology has also created conditions for varied flora, species-rich fauna, exciting cultural and industrial history and active outdoor life. Platåbergens Geopark is a collaboration between nine municipalities; Grästorp, Vänersborg, Trollhättan, Lidköping, Götene, Skara, Falköping, Skövde and Mariestad.

We use cookies to ensure that we give you the best experience on our website. If you continue to use this site, we will assume that you accept it.Ok