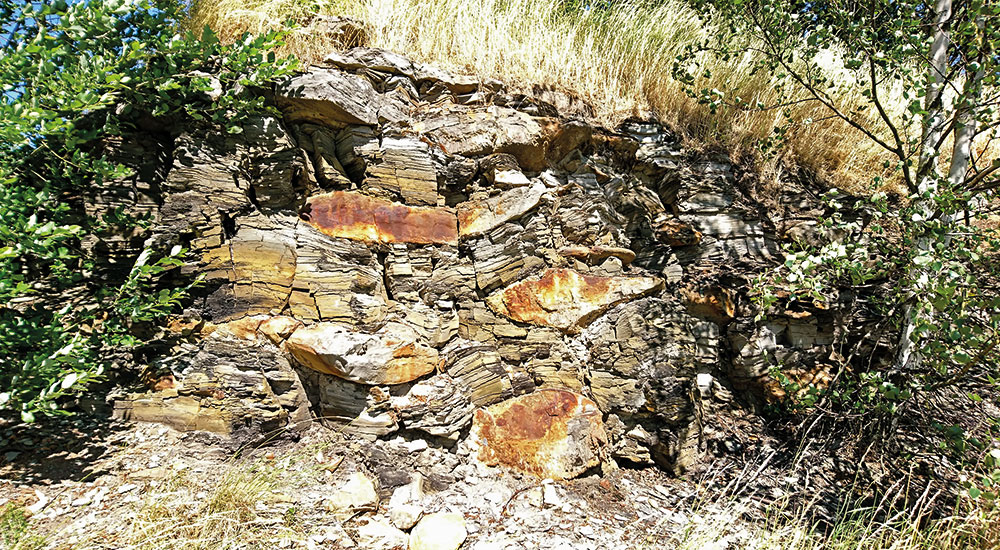 Just south-west of Kinne-Kleva village you can see large reddish-coloured heaps in the distance.

Alum shale was quarried from mines during the first half of the 20th century. The shale was used to produce oil for the armed forces during the first and second world wars. The mine reached its peak output during the mid-1940s. By that time around 300 people worked in the mine’s kilometre-long tunnels, which are not accessible to visitors today.

The oil that was produced, some 500 tonnes per year, was considered suitable for warships, and the plant was managed by the Swedish navy. The plant, which operated under the name of Flottans Skifferoljeverk (Fleet Shale Oil Works), was extended in 1941 and had an output of 20 tons of crude oil, 2–2.5 tons of “light petrol” and 8 tons of sulphur per day. Production was shut down in 1946.

Alongside the spectator stands at Kinnekulle Ring racing circuit is a long and spectacular exposed shale face that is around 500 million years old, in which large limestone lenses known as anthraconite or stinkstone are commonly found. These limestone concretions are particularly rich in hydrocarbons.

Visitors are advised not to enter the mine tunnels as they pose a serious health risk. This is because the shale contains relatively high levels of uranium, which produces radon gas.

There is limited access to the exposed shale along the race track, as this area is now used as a skid pan for vehicles.