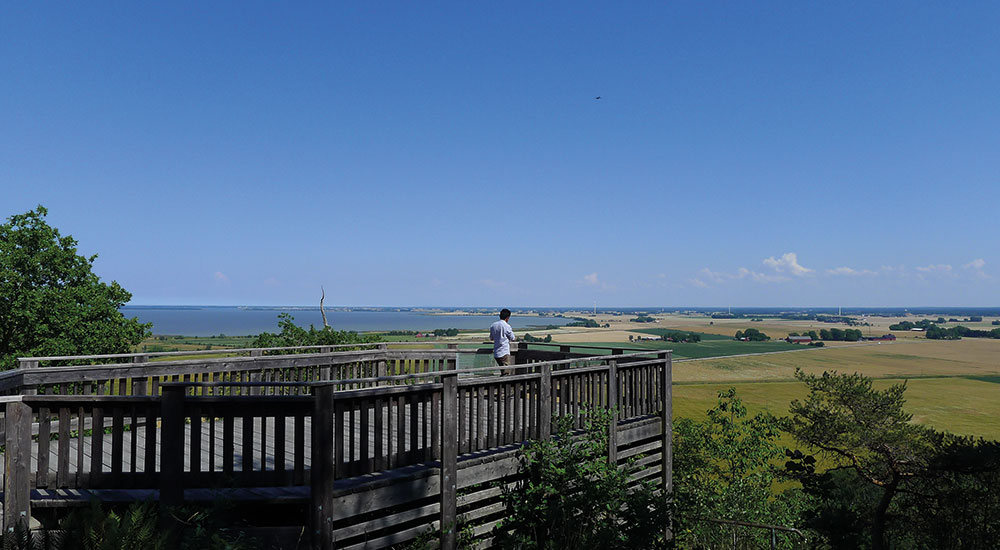 At the Floutsikten lookout point you stand on the edge of the Hunneberg dolerite plateau with breathtaking views over a flat landscape of fertile soil – the Västgötaslätten plains.

These plains extend from south of Lake Vänern eastwards, and are known for their rich soil, which have supported human agriculture for over a thousand years. After the last ice age this area was sea bed, and nutrient-rich sediment settled on the bed as thick layers of clay. The Västgötaslätten plains are a flat region where the variation in height in some areas (such as Varaslätten and Skaraslätten) is as little as 10 metres.

The bedrock beneath large parts of the Västgötaslätten plains is called the sub-Cambrian peneplain, and is relatively flat. The reason for this is that the bedrock was eroded to an almost flat surface some 600 million years ago. The peneplain was then flooded by a sea that covered it with layers of sediment, that later became sedimentary bedrock. Erosion of these sedimentary bedrock over millions of years then exposed the peneplain again (except from where the sedimentary bedrock were covered by dolerite, and created the table mountains). After the last ice age the flat bedrock surface was covered by the sediments that became the rich soils we see today.