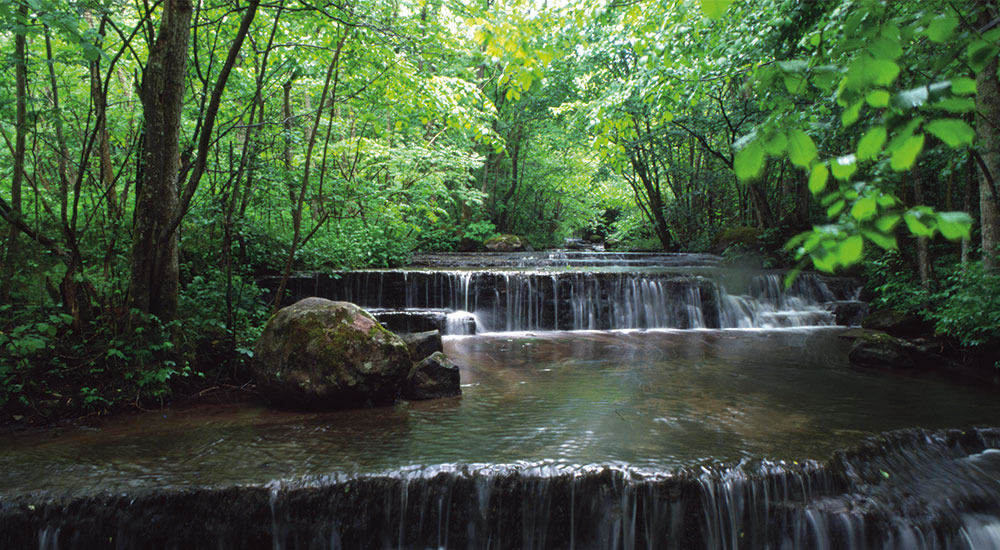 The largest alum factory in Skaraborg was located at Karlsfors during the first half of the 19th century. The site provided access to both alum shale and hydropower. After alum production was shut down, the site was used for lime burning. The entire area shows evidence of quarrying for alum shale and limestone, including red heaps of burned shale and the remains of lime kilns.

Most of the slopes around Silverfallet and Karlsfors are covered with broadleaf woodland and lime-loving flora – clearly showing the interaction between the underlying rocks and plant life. In spring there is an abundance of liverleaf, corydalis, lungwort, wild garlic, and small patches of yellow wood anemones. The red heaps of burned shale are mostly colonised by birch and willow.

Smaller areas of open pasture also have a diverse range of plants, including hawk’s beard, peach-leaved bellflower, dropwort and Carline thistle. At Silverfallet there are large colonies of liverleaf and drab brook moss. Grey wagtails and white-throated dippers breed by the waterfall. Further upstream there is bog wetland, several small brooks, and a varied agricultural landscape. Daphne mezereum grows widely on the wetland areas. This area is especially popular in spring, when the waterfall and the diverse flora make it well worth a visit. The song of Icterine warblers and wood warblers can be heard in the broadleaf woodland. In summer, the brooks dry out completely.

Silverfallet is one of the most popular destinations in Skövde and well worth a visit all year round – especially in winter when it becomes a fairy tale ice landscape!